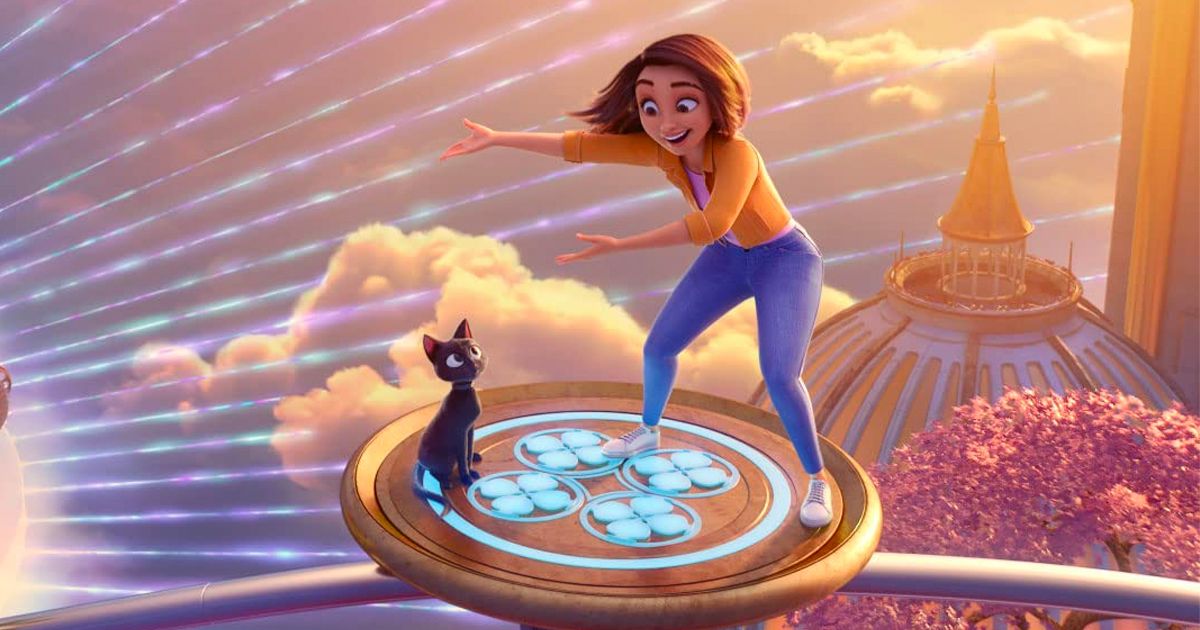 The world’s unluckiest woman enters a magical land to change the fortunes of a fellow orphan. Luck will make you smile and possibly shed a few tears. The big-budget, CGI animated fantasy shines a spotlight on needy children while telling a truly original story. An assortment of lucky critters and creatures dazzle in a spectacular setting. The highly imaginative narrative gives age-old superstitions a dynamic new spin. Luck is a brilliant first film from Skydance Animation.

Sam Greenfield (Eva Noblezada) reaches her eighteenth birthday with trepidation. She’s finally aged out of the foster care system. Sam never found her “forever family”. She spent her entire life living in orphanages. It doesn’t help that Sam has the worst luck. Everything she does or touches ends in abject disaster. Her only thoughts are for young Hazel (Adelynn Spoon), Sam’s roommate at the girls home. Sam has been set up with a job and tiny apartment. She has to stay in school and employed to remain housed.

Sam’s first day at Marv’s (Lil Rel Howery) floral shop goes exactly as expected. She sadly eats dinner sitting on a sidewalk. Sam learns that Hazel’s weekend trip with a foster family was canceled. She gives half of her sandwich to a curious black cat. It scampers away but leaves a strange penny behind.

The following day is a revelation. Sam’s lucky penny changes everything. Her ecstatic mood sours when she loses the penny in spectacular fashion. Stewing on the sidewalk, Sam’s surprised when the black cat returns. She’s astonished when Bob (Simon Pegg) asks for his penny. The “travel penny” is the only way a creature from the Land of the Luck stays safe in the human world. She follows an unnerved Bob back through the portal to the Land of Luck. Sam has to find another lucky penny to help Hazel. Bob reluctantly agrees, but they have to be careful. Misdeeds end up in banishment to Bad Luck.

The Land of Luck

The Land of Luck is an absolute joy to behold. Leprechauns, cats, pigs, and rabbits, lucky creatures, are the bureaucrats tasked with spreading good fortune. Bringing Sam in such a place is a recipe for absolute chaos. Bob, and his leprechaun assistant Gerry’s (Colin O’Donoghue), efforts to contain Sam’s bad luck will have audiences in stitches. I’m still chuckling at Sam’s “Latvian leprechaun” disguise; their harebrained excuse for why she’s so much bigger than everyone else.

Luck’s serious themes are artfully addressed. Sam’s lonely childhood, and her desperate efforts to change Hazel’s, brings a melancholic touch to the narrative. The film reminds us to not take love and family for granted. Every kid deserves care, nurturing, and a safe place to grow. It shouldn’t take luck or chance for a child to find a “forever home”.

Insert sigh here. Recent headlines concerning John Lasseter (Toy Story, Cars) will undoubtedly cloud this film’s release. The genius storyteller and animator behind Pixar’s success left to head Skydance Animation after awful “Me Too” allegations. He’s brought his incredible talent to Luck, and it shows. This wonderful film deserves to be judged on its own merits. Sometimes we must divorce ourselves from art and the personality of the artist.

Luck is a production of Skydance Animation and Apple Original Films. It will have an exclusive Apple TV+ premiere on August 5th.